Young German Couple’s Car Accident in California Leads to a Lawsuit and Quick Settlement of Case. 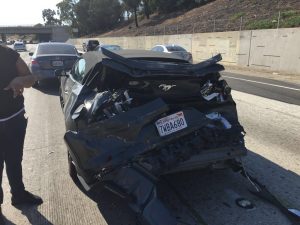 A young German couple’s car accident in California leads to a lawsuit due to the liability insurer’s initial failure to fully value the case, but, after suit is filed by Jackson Law International, the insurance company capitulates and settles the matter. S.R. and S.L. (initials are utilized to safeguard the privacy of our clients), two German citizens visiting California on a two-week long vacation, were involved in a car accident two days prior to their return to Germany. This accident ruined what should have been a joyous end to their long-awaited vacation and return to Germany.

On the day of this young German couple’s car accident in California, they were were northbound on the San Diego Freeway near Long Beach, California. S.R. was driving a rental vehicle in which S.L. was a passenger.  Both were fully and properly restrained in the vehicle via seatbelt. Traffic was proceeding in a normal fashion, and S.R. was keeping a sufficient and safe distance between his vehicle and the vehicle in front of him. As he was driving northbound on the highway, the vehicle in front of the young German couple began to reduce its rate of speed. Consequently, S.R. similarly slowly and correspondingly reduced the speed of his own vehicle.  Suddenly, and without warning, the vehicle in front of S.R. came to a sudden stop.  Consequently, S.R. also immediately and fully applied the brakes of his vehicle and came to a safe and complete stop behind this other vehicle.  However, in his rearview mirror, S.R. could see another vehicle rapidly approaching.  S.R. instantly recognized that this third vehicle would not be able to come to a stop in a timely manner before striking his own vehicle.  S.R. considered the option of changing into the lane either to the left or right of his current lane, but each was already occupied with other vehicles.  He immediately realized that such a maneuver would likely lead to an even more significant accident. In the meantime, the third driver drove his vehicle into the vehicle occupied by the young German couple.  The couple had the impression that the collision occurred with virtually no effort by the third driver to decelerate and at approximately 55 miles per hour in relation to his fully stopped vehicle, thereby causing a significant impact upon the vehicle occupied by this young couple.  The photograph of the vehicle driven by the couple shows the amount of damage to the vehicle as a result of this incident.

Police was dispatched to the scene, and the accident scene was processed by the California Highway Patrol.  The investigating officer prepared a Traffic Collision Report.  The Officer noted that weather conditions were clear; daylight was present, the accident having occurred at 4:56 p.m.; the roadway surface was dry; and there were no unusual roadway conditions present.  The impact of the vehicle was so significant that it caused their vehicle to strike the vehicle in front of them – also causing damage to the front vehicle and physical injury to its driver.  Specifically, the driver of that front vehicle was recorded as having complained of neck pain due to this further impact.

The Officer determined that the driver striking the couple’s car was operating his vehicle in violation of section 22350 of the California Vehicle Code, which provides as follows:

The Officer determined that the other driver’s violation of this section of the California Vehicle Code was the primary collision factor for this rear-end collision and that he was at fault for the collision. The damage to both vehicles was significant enough that the two vehicles had to be towed from the site of the accident.

Even though at the time of this young German couple’s car accident in California, they were both restrained in their vehicle, they were nevertheless injured. Both were also under shock when they exited the vehicle. The young couple initially did not want to be transported to the local hospital.  However, S.R. thought this issue over following the accident and then did change his mind.  He was seen that same day in the Emergency Department of the local hospital. However, S.L., due to shock and fear following the accident, did not wish to pursue an evaluation at the hospital. At the time of his presentation to the hospital, S.R. presented status post motor vehicle accident with complaints of neck pain and headache. As there was no loss of consciousness or head trauma, and the severity of the symptoms were deemed mild at the time of examination, S.R. was discharged with ibuprofen and cyclobenzaprine and, given his imminent return to Germany, he was to follow-up with his primary care physician if symptoms persisted.

For the remainder of their vacation, the young German couple remained in their hotel room due to pain and discomfort.  Moreover, S.L. was scared to drive anywhere in the area, fearing another accident.  Moreover, upon their return to Germany, the couple had one more week of vacation set aside to carry out plans in their homeland, but they were also not able to enjoy this week of vacation due to continued pain and discomfort. Upon returning to Germany, S.R. was evaluated by his primary care physician, who recorded that S.R. had presented with an acute cervical whiplash injury post motor vehicle accident, but that by this time the symptoms had resolved and that no further therapy was required.  S.R. was also seen by a specialist in the field of neurology and psychiatry.  In a report, the doctor diagnosed S.R. with cervical whiplash. In the history, the doctor noted that S.R. suffered from headaches and dizziness, and, over the course of several weeks, these headaches had significantly improved and the vertigo only still occurred occasionally.  The physician noted that the lingering nature of the symptoms over the course of several weeks was typical for such injuries.  S.R. continued to see the physician, however, inasmuch as he had become uncertain and fearful while driving an automobile. The doctor noted that S.R. had developed anxiety while passing a vehicle or when in stop-and-go traffic conditions.  In those instances, S.R. began to perspire and became fearful that he would lose consciousness. The physician noted that the symptomatology was consistent with someone suffering from anxiety due to the motor vehicle accident. S.L. experienced headaches for some time after her return to Germany.  However, she chose to not be seen by her physician there either.

This young German couple’s car accident in California continued to impact them from a psychological perspective.  They often relived the accident during ordinary traffic conditions, looking often behind them and fearful that they would be rear-ended by another driver – particularly, when they were required to stop suddenly, as was the case in this instance.  This was especially the case when they returned to California for another vacation.  They found themselves, whenever at a stoppage, i.e., red light, traffic, etc., looking behind them, thinking they would be hit.  Obviously, this nervousness had a detrimental impact upon the quality of their vacation.\

Jackson Law International was retained by the young German couple to represent their interests against the driver who had caused the incident.  Jackson Law International gathered the necessary information and put together a demand letter to the liability insurer. The insurance company initially did make a reasonable settlement offer, in view of the level of documented injuries and treatment.  However, arguably, the offer did not fully take into account the impact upon the young couple’s California vacation, the time lost in Germany upon their return, economic damages, and the psychological trauma of the accident long-term. As a result, Jackson Law International filed a lawsuit in California state court against the other driver. Suffice it to say that Jackson Law International was able to reach a settlement with the liability insurer for an amount two-and-a-half times the best offer made by the liability insurer prior to the lawsuit. The amount achieved was in excess of what the young German couple had expected prior to the lawsuit, leaving them quite pleased with the result.

We would welcome the opportunity to discuss your case with you to determine whether you also might have a viable claim following your injuries.