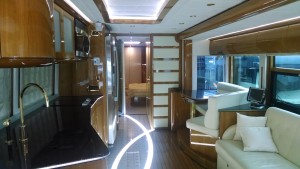 Businesses routinely enter into contractual agreements with business partners, individuals, and other companies.  Sometimes, a dispute arises and a lawsuit must be brought under that contract.  Some cases reveal – aside from a simple breach of contract – issues of fraud and even theft.  The attorneys of The Jackson Law Firm, P.A. are experienced in handling a wide variety of such matters.

Recently, I was retained by a family-owned German manufacturing firm that specializes in the production, installation, and sales of store construction and luxury interior finishing.  The luxury interior finishing division had expanded in the past decade to include luxury yachts and busses.  The legal problem centered upon a luxury bus, valued at $1,200,000.00, which had been built out in their German production center and had been shipped to Las Vegas, Nevada, to be sold on consignment in a local showroom.  Instead, the consignee of this luxury vehicle diverted it into the hands of a local dealer in Central Florida.  Speed was of the essence, as the dealer intended to offer the luxury bus for sale at one of the nation’s largest sales events in Tampa, Florida only days later.

The first step to recover the luxury bus was to file a Verified Ex Parte Emergency Motion for Temporary Injunction and a 17-Count Complaint containing claims of breach of contract, breach of contract implied in fact, breach of quasi contract, fraud, conversion, civil conspiracy, constructive trust, and replevin against all individuals and entities involved.  The Emergency Motion for Temporary Injunction, which requires one to overcome significant legal hurdles in obtaining the injunction, was nevertheless immediately granted by the court, and although the vehicle had already been transported from its Central Florida location to the Tampa sale location, I was able to coordinate the service of the court’s injunction upon the event’s organizers and the dealer.  As a result, the vehicle had to be returned to the dealer’s lot, pending resolution of the lawsuit.

The attorneys of The Jackson Law Firm, P.A. take great pride in assisting small and large companies, whether domestic or international, in their litigation needs.  Our firm is dedicated to providing an in-depth evaluation of your matter and discussing with you your potential claims or defenses.  The Jackson Law Firm, P.A. looks forward to the opportunity of serving you.

Please remember that we do not represent you and cannot take any action on your behalf unless and until we enter into a formal written Legal Representation Agreement. If we do not respond to your inquiry or are unable to take your case, please contact another Florida law firm immediately to have your case assessed.