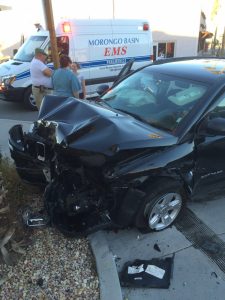 C.P. (initials are utilized to safeguard the privacy of our client) and three of his friends from Germany, embarked on a highly-anticipated road trip across the United States, which they booked one year in advance of their trip.  This was a once-in-a-lifetime opportunity for these four young friends from Germany to have an adventure together traversing the United States and visiting the National Parks and other attractions.  They rented a very typical American car – a Black Jeep Compass in Los Angeles, California.  C.P. and his friends were looking forward to their one-month long American road trip before returning to their studies in Germany, when their vacation was abruptly interrupted by another driver, leading to this German student’s car accident in California.

The friends were driving back to their motel from Joshua Tree National Park in the city of Twentynine Palms, California.  The driver of a white Dodge sedan yielded to a semi-truck traveling in the opposite direction before making a left turn, but failed to yield to the Jeep driving behind the truck.  As a result of the driver’s illegal left turn in front of Plaintiff’s vehicle, he caused a double-impact collision, i.e., the impact of the initial collision caused by the other driver’s negligent driving was so severe that the Jeep was forced to strike a palm tree.  Fortunately, the four young men were all wearing seatbelts.  Nevertheless, C.P.’s injuries were so severe that he had to be taken by an ambulance to the local Emergency Department, where he received emergency treatment for his injuries.  Obviously, what had started as a wonderful trip through the United States was ruined.  Moreover, C.P.’s functional mobility was, and continues to be, impacted by pain and discomfort.  Upon returning to Germany, C.P. had to undergo follow up treatment for his injuries and persistent pain and discomfort.

Jackson Law International was retained by C.P. and his father to represent him, and a lawsuit was filed against the at-fault driver for this German student’s car accident in California.  The insurance company for the driver required not only the U.S. medical records, but those from Germany, in order to evaluate the case.  Our law firm’s ability to obtain all necessary information and records from Germany allowed the driver’s insurer the ability to fully evaluate the scope of the damages, and the insurer tendered the full value of the insurance policy in settlement of the claims.  As a result, Jackson Law International was able to achieve a settlement for C.P., leaving him very pleased with the result. We would welcome the opportunity to discuss your case with you to determine whether you also might have a viable claim following your injuries.