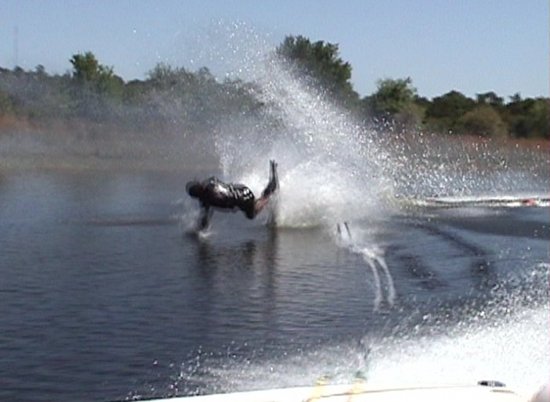 Jackson Law International achieved a $5,000,000.00 settlement in a medical malpractice case on behalf of a German exchange student in Minnesota after a physician and hospital failed to properly diagnose a devastating injury to his leg.

The student, Lukas (his name has been changed in order to comply with the case’s Confidential Settlement Agreement), had been sent to the United States at the tender age of 16 to study for a year in Minnesota.  Shortly before the end of his exchange program, Lukas was taken to the emergency department of a local hospital after sustaining a knee injury in a water-skiing accident.  Through the impact with the water, Lukas had felt his knee dislocate, but before arriving at the hospital the dislocation had spontaneously reduced or corrected itself.  In the emergency department he was seen by hospital nurses and an emergency physician and examined.

Lukas, while not knowing the English word for “dislocation,” informed the nursing staff that he had been injured water-skiing and that he had felt his knee “pop out, then in.”  Lukas was noted to have pain of “10” on a scale of “1-10.”

The emergency physician documented Lukas as having “tingling” in his foot, even though the nurses had initially charted the foot as being “numb.” The physician recorded that he was able to put Lukas’ leg through a normal range of motion – meaning that his movement was not limited by the injury. Lukas also explained to the physician that he had felt his knee “pop out” and added that it had “popped in again.” No translator was provided for Lukas during his stay in the emergency department.

The emergency physician told Lukas that it was not possible for the knee to have popped out and then back in again, but he did order x-rays.  After diagnosing an avulsion fracture, which is a small fracture that is most often treated non-surgically, Lukas was sent home with his host parents for follow-up during the week with an orthopedist.

However, unbeknownst to Lukas, the avulsion fracture was the least of his medical problems.  As it turns out, Lukas had also experienced

This meant that his knee was incredibly unstable and could not possibly have been put through normal range of motion exercises in the emergency department. This fact was but one issue that called the examination in the emergency department into question.  However, these additional injuries also set the stage for Lukas to develop a far more significant medical emergency, and ultimately led to a complicated medical malpractice case.

Most of Lukas’ injuries were not visible on simple x-rays.  The crux of this case, therefore, turned on the fact that the mechanism of the injury, i.e., the high-velocity impact, and the patient’s complaints should have alerted this physician that there might be a more significant danger for this patient.  In fact, this type of injury is considered to be a vascular emergency because of the risk of arterial compromise, i.e., damage.

In this case, the patient’s history and mechanism of injury should have been enough to raise the concern for a dislocation in a prudent medical doctor.  That concern then leads the prudent physician to think popliteal neurovascular injury.  If so, additional testing is warranted or, at minimum, the patient should be been kept overnight for observation.  Instead, Lukas was discharged.

Within the course of that evening, Lukas’ pain continued.  The host parents called the hospital’s nurse-advice line, but were told it would get worse before it became better.  However, the additional injuries caused progressive ischemia (insufficient blood flow) to lead to the development of compartment syndrome in Lukas’ lower leg.  The host parents chose to take Lukas to a different hospital after his problems persisted.

The doctors who examined Lukas in the second hospital immediately recognized the significance of his injuries.  Lukas remained hospitalized for several weeks.  As a result of the initial physician’s failure to timely intervene in this process, the inadequate circulation to the leg was woefully insufficient to maintain tissue viability and by the time the nature of Lukas’ injuries were truly appreciated by the physicians at the second hospital, the damage was done and the physicians urged an amputation of Lukas’ leg.

Ultimately, at the insistence of Lukas’ mother, Lukas was sent by air ambulance back to Germany, where he was treated for an extended period of time by German doctors who were able to save his leg.  However, he underwent 14 surgeries to attempt to correct the severe damage to his leg.  Despite these efforts, the damaged muscle tissue in his leg was beyond repair and left him with what doctors there referred to as a “stork leg.”

Lukas was an avid tennis player.  Before the accident, this German exchange student played soccer and also jogged, skied, engaged in in-line skating, and rode his bicycle.  All of these activities became difficult to impossible for Lukas due to his injuries.  Obviously, so much of Lukas’ life has been impacted on a daily basis.

Jackson Law International was retained by Lukas’ family in this medical malpractice case to sue the hospital and physician.  Our law firm hired ten experts to help properly prepare this case for trial, including an emergency room physician, a pediatric emergency room physician, an orthopedic surgeon, a German orthopedic surgeon to address the care in Germany, a vascular surgeon, a physiatrist, a psychologist, a life care planner, a German business and occupational expert, and an economist.

Lukas was flown to the United States so that most of the hired experts could evaluate him in person.  The reports from these experts were comprehensive and painted a picture for the defense that trial presented a significant risk to them.  While Minnesota allows health care providers to opt out of mediation, ultimately it was the defendants – when faced with the overwhelming evidence that would be put before a jury – who requested the mediation.  Ultimately, Jackson Law International achieved in this medical malpractice case a $5,000,000.00 settlement on behalf of the German exchange student.

When you hire a law firm to represent you in a medical malpractice case, consider two important factors:

These two factors will go a long way toward ensuring your success in your case.

While other firms may claim to have such skills and ability, take the time to verify the truth of those claims.  Lukas’ family did take the time to fully vet this law firm, and now have the peace of mind of knowing that they achieved a significant settlement for Lukas.  In fact, the size of the settlement exceeded norms within the Minnesota medical malpractice community.  As a result of this settlement, Lukas was able to pursue a new career path in the field of engineering and take active steps to achieve some peace in his life.

I and two other attorneys within the firm have visited Lukas and his family several times in Germany since the resolution of the case.  It is a reflection of how we see our clients – an extended family for whom we diligently strive for success.

The nature of this medical malpractice case underscores another point which lies at the core of this law firm.  We routinely represent German clients in lawsuits throughout the United States.  A generic American attorney / law firm simply cannot understand a German client’s needs, based upon language and cultural differences, on the same level that Jackson Law International is able to offer.  Our ability to handle these nuances often is the key to a successful outcome. Similarly, in those firms that use a German attorney inexperienced in such matters to bridge the gap for their U.S. counterparts, mistakes are bound to creep into the process.  Insist on someone not only capable of speaking the language but also experienced in your type of case – we look forward to serving your needs.

Our international experience allows us to assist clients and other law firms in international matters, and the firm looks forward to the opportunity to put that experience to work for its clients.

Feel free to contact us to discuss your medical malpractice matter.