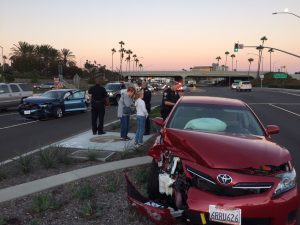 A German businessman’s car accident in California led to a lawsuit and settlement. Dr. C.K. (initials are utilized to safeguard the privacy of our client), a German citizen, was visiting New Port Beach, California on a business trip for his employer, a leading German multinational engineering and technology company. Dr. C.K traveled to California at least once per month for work. He was very familiar with New Port Beach and drove rental vehicles to get to work anytime he visited California.

On the day of the motor vehicle accident, Dr. C.K. drove to the office in the morning as usual and attended a few meetings. Since it was the last evening before his flight back to Germany, his plan was to meet with his co-workers at a restaurant for dinner. 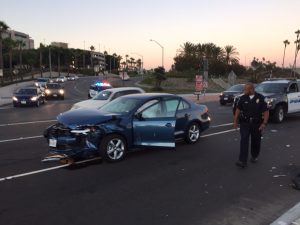 Dr. C.K. left the office and was on his way to the restaurant, when he came to a stop at a red traffic light at Pacific Coast Highway. As the traffic light turned green, he attempted a left turn.

Just as Dr. C.K. was legally engaged in making this left turn via a green light, another driver failed to stop at the traffic light indicating red for her lane and proceeded towards Dr. C.K. at a speed of approximately 60 miles per hour, heading westbound on the Pacific Coast Highway. This other driver struck the left frontal section of Dr. C.K.’s rental vehicle head-on at full speed. The impact caused Dr. C.K.’s vehicle to spin around from the impact and the airbags deployed before the vehicle came to a complete stop. Even though Dr. C.K. was restrained in his vehicle at the time of the collision, he suffered injuries and damages because of the impact of the collision. 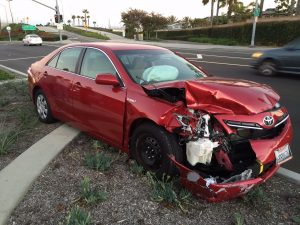 Based upon the other driver’s initial position and her position after the collision, as well as the damage to the vehicles and deployed airbags, the intensity of the impact of this collision was obvious. Dr. C.K. was disoriented and needed some time to realize that he was involved in a motor vehicle accident. He spoke with the other driver at the scene, and she admitted that she was at fault and that she was looking at the sun while driving her vehicle and missed the red traffic light. The police came, and Dr. C.K. had to call his co-worker to pick him up because his rental vehicle was a total loss. Dr. C.K. did not seek medical care right after the accident. He was still under shock when he left the scene and was unsure about his options as a foreign national in terms of obtaining medical care.

Throughout the rest of the day, Dr. C.K. felt the impact of the accident on his body. His pain level increased and continued to increase even days after the collision. Dr. C.K. was complaining about extreme headaches for over a week, as well as nausea and fatigue due to the whiplash and deployment of the airbags, which caused his prescription glasses to break and fly onto the footwell of the passenger seat. His body was aching, and his knee was injured and caused him to limp. Dr. C.K. felt pain in his shoulder, and he could not stress the joint for days.

Upon returning to Germany, Dr. C.K. continued suffering from severe headaches and pain in his neck. Due to the pain and stiffness in his neck, Dr. C.K. had to wear a neck support and turn his whole body in order to avoid the pain when turning his head alone, which limited his daily activities and work enormously.

This German businessman’s car accident in California continued to impact his life upon returning to Germany. He experienced nightmares when he dreamed about the motor vehicle accident; he woke up at night, drenched in sweat. When he drove his vehicle and another vehicle approached him at a higher speed, he repeatedly feared that this other vehicle would collide with his vehicle. He consistently replayed the accident in his mind, which was very disturbing.

We would welcome the opportunity to discuss your case with you to determine whether you also might have a viable claim following your injuries.